Instructions on How to Make Scallion Pancake 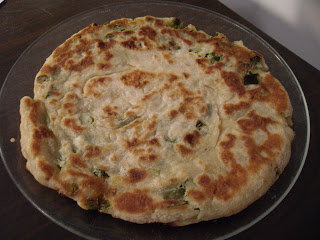 I've eaten more than my fair share of scallion pancakes over the years, yet somehow I haven't made them until now. When I saw this recipe, I immediately filed it away as too good to be true. There are so few ingredients and it's so straightforward I convinced myself that there had to be a catch somewhere.

Except, there's no catch and it's not too good to be true. Scallion pancakes really are that easy to make at home. I can't believe I've been ordering them from my neighborhood Chinese take-out when I could have been making them all this time?!
Scallions are potent cancer-fighters. Regular intake scallions can reduce cancer of the stomach, colon, esophagus, pancreas, and breast.
Here are instructions on how to make addictive and delicious Chinese scallion pancakes in your home kitchen!

Put flour in a bowl, then slowly add the water in a steady stream. Continue to mix the flour and water while the water is being added, until it forms a ball of dough. Cover with a damp cloth and allow to sit for about thirty minutes.

Roll out the dough onto a floured surface, then brush with a small amount of oil. Cover the dough evenly with the scallions, then sprinkle a bit of salt over the entire thing. Carefully roll up the dough and scallions into a long cylinder. Once you have rolled it into a snake, tightly coil the roll like a cinnamon bun. This coil can now be rolled out into a fairly flat pancake. The pancake should be fried lightly on both sides, until each side is a golden brown; this takes about five minutes per side.
healthy meals